skip to main | skip to sidebar

I am off on retreat in a few hours so I am busy packing. It is lovely sunny day but the forecast is not good so I am pondering which season to pack for?!

It has already been quite a busy day: I have been in my office doing some admin that can't wait till Monday and just been to vote. I also have some shopping to do so I little trip to ASDA's is required and I need a spot of lunch.

So, the next time I write will be back on the Ellen Loudon blog because my diaconate year will be over and I will be a priest! I will, of course, be changing the Ellen Loudon tagline and will be making some changes to the format...but I am not sure exactly when that will happen.

This was twittered to me today...and it is a lovely distraction for a hot summer's day

Posted by Ellen Loudon at 1:26 PM No comments:

what a week this is going to be!

So here I am starting my last week before I become a priest (do I really mean 'become' - like I will change into someone new on Sunday? I am not sure? But, I am not sure how else to refer to my 'change'...any ideas do let me know!). Anyway, I am ordained priest on Sunday so this week is a going to be a bit busy. I am in the parish until Thursday lunchtime then off on retreat at teatime until Sunday.

I have a long long list of bits and bobs that need sorting before Sunday though you'll be pleased to know most of them are very superficial and none are theological - they mainly involve cleaning, changing the sheets on the bed, visiting people in hospital and in the sheltered accommodation, going to the hairdresser, meeting Henry for various things, buying black clothes dye to revive my clergy blacks and there is a slim chance that I may go to see Girls Aloud tomorrow night (if my attempt at gegging into the Echo Area pull itself off - though to be honest it is not looking good - but I live in hope).

I have written a brief post for re:jesus about the appearance of Jesus' face in a marmite jar which you may enjoy.

Hope you have a good week.
Posted by Ellen Loudon at 6:18 PM No comments: 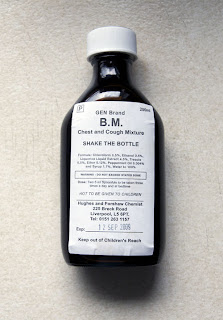 Sorry to not be blogging this week. The usual excuses...but a few new ones: I had a rather stressful preaching assignment for Thursday for Ascension day - an ecumenical service with Eucharist. I felt under a great deal of pressure to develop some ideas about Christ and the founding of the church - which I think I managed to pull off in the end - but it was touch and go until really the last minute.

Added to this stress I have had a nasty cough for a few weeks and I was starting to get really very tired of all the cough cough coughing. Eventually one of my parishioners suggested going to the local chemist and ask for the pharmacist's special cough medicine - called Black Magic (see above)! Well, I can tell you it has worked a treat...you feel absolutely no pain whatsoever and the cough submits very quickly to the black magic potion (if you click on the image above it gets big enough to see the ingredients of the potion - then you'll know why it is so effective).

Mark and Eva are both away for a few days (Eva in Colomendy of a school trip and Mark up Ben Nevis)...so I am home alone - which is lovely. Off to the supermarket now and then I shall potter about the house, eat cake and prepare myself for an evening of rubbish TV with nobody to fight over the control with (I have 3 episodes of primeval to catch up on).
Posted by Ellen Loudon at 2:16 PM No comments:

Last night saw a (sort of) return to form for the UK at the Moscow Eurovision...Jane and 'the lord' ALW did very well to achieve 5th place. The winner was Norway...see below:


It sounded great last night but today I am already starting to feel a bit irritated by it...but that's the power of the earworm!

Anyway, I had a great evening twittering away during the event and enjoying each offering as it came to us live. Elise and I had plenty to say throughout and couldn't believe it when the last song ended - it seemed to all pass off very quickly.

I hope Philly J had a great time last night in Moscow. I can't wait to hear about what the live interval act was like in the flesh in the stadium. IT must have been fantastic because it looked pretty amazing on the TV. If you missed it here it is again:

The bells the bells

I had some time off today so went off to Liverpool Anglican Cathedral to hear the bellringers chime out John Lennon's Imagine. It seems an unlikely secular hymn for the Cathedral to choose to launch it's initiative to encourage young people to think creatively. Hailed as "A premiere recital and reinterpretation of John Lennon’s ‘Imagine’ using the bells of Liverpool’s Anglican cathedral and produced by artist Cleo Evans in collaboration with local change ringers." The event was part of FUTURESONIC (URBANFEST OF ART, MUSIC & IDEAS).

It was actually quite a moving experience and I noticed that a few people were drying away tears. A song of hope but also a song of despair...hearing it being peeled out by the bells and then sung inside the cathedral by children who weren't even born when John Lennon died was strangely haunting.

The event has been 'blessed' by Yoko Ono who wrote to the cathedral:
"The sound of your bells will travel around the world and remind people of John Lennon and his belief that there is an urgent need for world peace… like the church bell in the town, which used to ring as the warning to people about impending disasters like flood and fire!

Thank you for thinking of a very important way of bringing change to the consciousness of the world."
Posted by Ellen Loudon at 4:27 PM No comments:

becoming slightly obsessed with guessing the QI words...can't work this one out at all!? It begins with G...

Posted by Ellen Loudon at 10:24 PM No comments:

Ellen Loudon
I have lived in Liverpool since I was 18years old. I came here to study drama, pop music and be an actor. I spent a couple of years in a theatre company in Leeds during the mid 1990's returning to start an academic career at Edge Hill University in 1998. In 2001 I started to explore the possibility of full time ministry in the church of England. After a long period of discernment I started at Trinity College, Bristol in 2006 and trained be a vicar. I was ordained as a Deacon in Liverpool Anglican Cathedral in June 2008 and ordained priest in June 2009. I am serving as the assistant curate at St John Chrysostom and St Peter's churches, Everton.